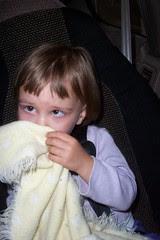 Here's a recent pic for you all. Ahh the wonders of steroidal drugs. Not just grumpy and hungry but "moon face" too. That's what they call it, the cubby cheeks and Buddha-belly, comes from water gain and salt retention... crazy stuff. Anyway, it will gradually go away and she will look more like her normal cheeked self. She'll still have a bit of the puffy cheeks through the course of the treatment since she will still be on this same steroid, Decadron, for 5 days each month.

She is done taking the grumpy pill tomorrow evening! Yippee, day 21 is finally here! And if that wasn't enough good news, our doctor called today and told us that we can take her off the monster antibiotic, Vancomyacin, and switch her to another more narrow spectrum one that we only have to give her ONCE A DAY!!! Yippeeee!!! We have to give her the Vanco 3 times a day, every 8 hours and it takes 2 hours to infuse it via her broviac so.... guess how much consecutive sleep we get while doing that?... Ahhh... I see you all paid attention during that math class, yes, you are correct... 6 hours... minus the snacking and potty breaks of course:) Actually she has been doing good on that front too. Only really wakes us up maybe once a night or not at all. She still goes to the bathroom her self and the big bowl of cheerios seems to last her through the night. The only thing that I occasionally wake up to is the sound of loud crunching at 2am in the adjacent room:) I just chuckle and fall back to sleep.

See what else?... Still a challenging pace but we can see the light at the end of the tunnel. Tiffany's mom Vicky is leaving on Wednesday so we will miss the help but hopefully we are through the most demanding times. Hey Robin... Thanks for loaning us your wife for so long. It has been sooooo needed and very helpful! Dr. Smith said that they will probably pull the Broviac after we are done with DI, if she can make it through without a ton of infections. Abby's eye has been more crossed since the start of DI, probably since she is weaker and more tired but I'll have to ask the eye specialist why when we go next week. The tentative schedule for the eye is to do corrective surgery after DI is finished. So, looks like lots of surgeries in September and November... Oh well, one day at a time.

I think that is about it. Just taking it day by day. Some days, like yesterday and today, she does really, really well. And some days are a bit harder. She has a week off of chemo now so that will be a good thing for her, but also this is the danger zone and Dr. Smith told me not to be surprised if she gets admitted again in the next couple weeks. I

In general though she's doing great. She's been playing a little bit, mostly with her kitchen and food toys and watching a lot of videos... she really likes the Blues Clues Snack Time video! The only problem letting her watch is that she starts asking for everything that they make! I can't keep up with the video when they have something new every 5 minutes! :)

Well, there is the long and short of it. I'll have to write more later about how she makes these little noises when she eats... kind of reminds us of rain man... and how she pretty much mumbles constantly about everything and anything that is going on around her. All I have to say is Chemo is some pretty strange and often disturbing stuff!

Bye for now.
Posted by Mark Schreiber at 8:14 PM

Just wanted to let you know how much we love and appreciate you guys! The faith you are choosing to apply is glorifying! Keep "emptying"!