Some thoughts from Tiffany 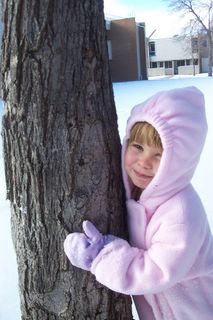 It's Saturday morning and I've had two full days of just hanging at home with the girls, Mark at work, and it's felt like a normal life somewhat. But of course what is normal anyway and I am learning that if I set my heart on a normal day or on any of my circumstances I am setting myself up for a fall. And that's good for me to learn. I have been in and out of anger at God and yielding of my heart to His plan. It's hard to swallow a lot of the circumstances of our life right now, like my little girl can't walk more than 5 or 6 steps this week without falling down, and still believe that God is good. But He is relentless in redefining my view of "good" and for that I am thankful. I have been broken and in that place He has shown me the things I hang onto instead of Him. Not because He is narcisistic (sp?) and has to have my allegiance, which has been my belief deep down until now- but because He loves me deeply and wants me to let go of the things that are keeping me from experiencing His amazing love and peace that transcends heartbreaking times. He wants me to know Him and be known by Him in a way that will pull me out of this self-focused place so I can experience truth and see my place in the big story He is writing. That has brought so much freedom (and at times frustration of course, it's not like I've got it all figured out) because I no longer have to make it all work, control, figure it out, whatever. I can let go.

Anyway, I just wanted to let you all know that Abby is doing better this week. She has been cutting out valentines and coloring and talking in non-whining tones and not asking to just watch TV all the time. Her spirits are coming up and that makes me really happy. I feel like I have her heart back as we work on this trust thing between us. I know she's scared and confused at all that's going on but I sense she is adjusting and trusting Mark and I again to protect her as best we can. I'm sure it has rocked her little girl world to see that we can't majically protect her from all bad things. That's probably good for her, but it does break my heart some. It has been good to see her huge love for life starting to return.

On Monday we go in for the big bone marrow test and a spinal tap. No other chemo that day. They are letting her blood counts come back up and will start the next, less intensive phase of the treatment on the 8th.

To Frontier Academy Elementary school- your gift basket brought lots of tears to my eyes. I don't really know any of you but you lavished us with love and gifts and it was so touching, thank you. I am amazed by your generosity and thoughtfulness.

Just a quick note to tell you that things are fine. They did another blood culture to really see if she has a blood infection or if it was just contamination. At this point she will be on IV antibiotics for 3 days, we just hook her up at home every 8 hours then wait 2 hours and unhook her. Not too bad, a little less sleep for us, but way better than be in the hospital for now. Once they get the 2nd culture back, they will make the decision of if she will stay on antibiotics for longer or not. If she has a blood infection then she will be on something for about 14 days. Otherwise, she'll just finish up the 3 day course.

That's it, hope you got the photo alblum... If you want to be on the list just email me, click in the right hand colum of the blog for the address.

Posted by Mark Schreiber at 10:23 AM No comments:

<>So after a bit of a crazy day, I decided to go to the Team in Training meeting and see what it is all about. It was a chore, to say the least, to get out the door since Abby was so, tired and grumpy last night. Her tummy was bugging her all day today and I think dinner didn’t set so well, and she was tired, she kept saying, “I just tired”. Well I finally got out the door after putting Abby to bed and scuttled past our energizer bunny of a child, Anna. I don’t remember giving her caffeinated beverages yesterday, or sugar, but she was wound up! Anyway, I drove to the meeting site, a running store, via the wrong running store on the other side of town, and arrived promptly a half an hour late. After signing in, I looked up and saw my friends and co-workers from Greeley, the Carlenos. How cool was that! Thanks guys! You all rock! There were also about 30 people besides them at the meeting, very cool indeed. <>
This meeting really made me value the human spirit; maybe some of these people came because they just wanted the motivation and support to reach their running goal, some for a trip to Alaska to run a race, some even for Abby, like my friends. I just think it is pretty cool that 30 people, in Fort Collins alone, would sit through an hour + long meeting, sign up, raise money for Leukemia, trains for months, and then run, bike or do a triathlon for a cure.

Well, on another note, Tiffany just called and said that she will need to take Abby back down to the doctor. The blood culture that they have been running since our Monday appointment came back positive for a blood infection. Abby isn’t extremely neutropenic, ANC at about 400 on Monday, but still is at high risk of her body not having enough to fight it off. They gave us the option to check her into the hospital since she will have to be on antibiotics for a while or set up a home care arrangement. Tiffany opted for the home care option so we’ll just hook the antibiotics up to her Broviac ever 6 hours it sounds like. Since Abby doesn’t have a fever, the infection is probably not to severe but it still needs to be taken care of course.

Man, I thought we were off of this roller coaster for a bit! Oh well… I’ll keep you posted but no new will probably mean good news.
Posted by Mark Schreiber at 8:11 AM 1 comment:

Back from Denver, all is well

We're back from Denver now, and all is well. Her fever is gone, and she check out all good. Maybe she just has a little cold because of her counts being so low. While we were down there, since we had an appointment for Tuesday anyway, they went ahead and did the next chemo treatment. This will be the last one of her induction treatment. After next weeks bone marrow test, she will have a week off for her body to recover and get her counts back up before she starts her consolidation phase of the treatment, 2 months I think. She'll be off the Predinsone for a bit which will hopefully make her less moody and whiney. That will be a big releif to us, let me tell you.

Her counts are 1300 total White cells, 400 ANC, and the rest of it looks good too. She still is at risk of a fever/infection but not as low as she has been, that is a good sign that her bone marrow is starting work good again.

Well, I'm off to rest. Just wanted to let everyon know that things are A-OK.

Yup... Back Down to Denver

I'm leaving to Denver here in 1/2 hour to meet Tiffany there. Abby has a low grade fever, a couch, and threw up last night so they recomended that we bring her in. She's napping right now and Tiff's going to leave when she gets up. We will just be going to the office for now, they'll check her there give her the chemo that we were going to go down for tommorrow while we are there and if she isn't looking good, we'll check into the Hospital again. Hopefully not, but you never know.

The stress of this new lifestyle is really starting to wear on Tiffany and I. Lots of whining at home, crying, mostly from Abby, (but everyone has their share I'm sure) and stressful times of taking medicine or getting her Broviac site cleaned. Well, time for me to go.

Tell you all more later.

A Way Cool Way YOU can Help!

A Way Cool Way YOU can Help!

Hey, everyone is always asking if they can help and other than cleaning our house weekly, watching our kids so we can go out for a date, or lavishing us with lots of love and prayers I haven't had may good ideas. But now that I'm a bit more past the shock of the diagnosis and have been poking around online, I've found a big winner of an idea in my book!

There is a great organization called "Team In Training" that does sponsored races to help children with Leukemia. Way cool idea really, and the best part is there is an info meeting tommorrow night in Fort Collins! I might even go if I can get away for an hour. I think it would be really cool if any runners, bikers or triathatetes out there would want to race and at the same time help out kids like Abby. You can even run with a picture of Abby or another child with Leukemia who you are helping on your bib! Way cool, like I said.

So check it out! Abby is running a big long race, with lots of hills, and climbs. Wouldn't it be cool to run with a purpose? When you feel like you can't go on any more, or you can't finish the race, you can get inpiration from what you are running, biking, or walking for! You'll be able to identify with these kids a bit more and help them at the same time! I'd encourage EVERYONE to take a look at this site even if you are not an athlete of any type, it is very motivational!

Maybe I'll see some of you at runners roost tommorrow, I mean Tuesday Night!


Home page of Team in Training

Here is an awesome video!
Posted by Mark Schreiber at 11:10 AM No comments: