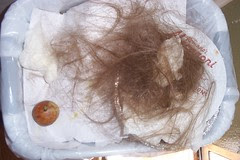 Well, speaking of tired, I'm gonna go take a nap. I'll post a puffy-faced-bald-headed picture for you all soon... you have been warned. :)
Posted by Mark Schreiber at 2:40 PM

Love you guys so much! I didnt get to say my goodbye to you but nevertheless, please know that you guys are in my prayers!
-chanel-

hey guys--
whenever i read this, i always want to say something, but never know quite what... So, i guess just, hey, i'm here. I'm so glad to be part of your lives, to just be able to part of your journey. Can't wait to see you, to move here to Fort Fun!!