Cat Scan... & 3 other appointments
Originally uploaded by fireater.
So Abby had her birthday CAT Scan today at the hospital. The machine looked a lot bigger than this one and no, no cats were harmed in the making of this blog. Anyway, she did really good for the scan. So good that she was done in 5 minutes. The scan showed that everything was fine in her sinuses, that was what they were looking for. Sometimes kids that are immuno-compromised can get sinus infections that don't show up by the normal means but still make the kids feel really tired and worn out. But that was not the case so at least that is one thing that can be ruled out.

Our next stop on this tour was Dr. Lee, the tummy doctor as we like to call him. We talked about her symptoms and the history and all that and then about options. The best option is to do an Endoscopy of her tummy to see what is going on. This will happen next week on Tuesday and they will put her under again for it. Hopefully that will shed some more light on the why she hasn't been feeling so good.

Dr. Lee ordered some tests so while we waited for them to get scheduled, and since they are just across the hall, we went over to CHOA for Abby's exam. The decided to draw blood and do all of the labs so that we wouldn't have to go to another lab and she saw Dr. Smith to talk about our appointment with Dr. Lee. Abby did pretty good but she wanted to eat and when I told her no she had a bit of a melt down... But the reason I told her no was that since she hadn't eaten for 7 hours, since breakfast, there was a chance that we could get the abdominal ultra sound, ordered by Dr. Lee today... They fit us in so back down stairs we went and checked in at the ultra sound place.

Whew... Appt. #4. The ultra sound took about a half hour and Abby once again did great! What a little trooper huh! She stayed still for a while and then I realized that she thought this was like the CAT scan... I filled her in and told her she could move her head and watch the "movie" of her tummy and that kept her pretty occupied.

After that was done, we went back up to CHOA to pay our bill and get some food... after 2 cookies, a banana, 1 muffin, a glass of water and a couple snack for me, we were on our way.

Anyway, as you can see it was a busy day but a good one. Hopefully we will be a step closer to figuring out why Abby has been having such a difficult few weeks.

I'll continue to keep you posted as we learn more.
Posted by Mark Schreiber at 10:15 PM No comments:

Abby's turning 4 and is getting some more tests. 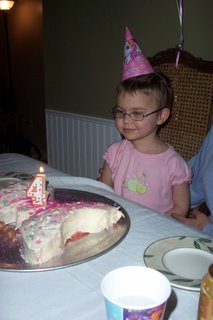 So Abby is turning 4 today! Yippee! Crazy too. 1 year ago I was in the hospital for her day 28 bone marrow test. Also a year ago on her birthday, her cheeks looked like big fat balloons, cute but big! And last year she almost fell asleep on her birthday cake!

But not this year! Nope, this year we had a terrific party! On Saturday she went out to tea with Tifffany and her mom and then we all went out to dinner that night. She even had a big bowl of ice cream after dinner. She did end up throwing that up later in the night but lets not talk about that right now. On Sunday, we had an early party for her with a butterfly cake that she helped make and decorate.

Overall it was a great little family party and she had a blast. She got a couple presents and some very nice cards and was happy as a clam for the night.

Now since Abby is so special, she is going to get a couple more presents this year for her birthday... one will be a CAT scan tomorrow, and the other will be a gastroscopic survey. Wohoooeee! I mean what other 4 year olds do you know that get to utilize such amazing technology so early in thier life! Pretty special indeed!

Anyway, Abby will be getting a scan tomorrow to check out her sinuses since she just doesn't seem like herself lately. Immunocompromised kids often can have a sinus infection but not show the symptoms since they have such a low immunity.

She will also meet with the gastro intestinal doctor to get things ready for a gastroscopic survey in the near future to check for ulcers and/or whatever else may be going on with her tummy. They will have to put her under for that procedure so we'll just be talking to the doctor tomorrow and setting up a time for the procedure.

So, what do you think? Pretty cool presents huh!? Actually, I think it will be very helpful to kind of get to the bottom of some of these things that have been making Abby feel so bad. Pray that they can get some answers so she can start to feel better.
Posted by Mark Schreiber at 6:30 AM 2 comments:

So just another quick post to let you know about Abby. Overall she is doing pretty good. No blood infection ever showed up, her immunity (ANC) is fine, and she's been playing a lot more. Some days she still feels a bit tired and grumpy/whiney, but hopefully that will be less in the near future.

She still is having a hard time at night, waking up a couple times a night sometimes crying, or wanting to be held. Last night she threw up and had some real pain in her stomach, probably from all of the acid and the possible ulcer. We are still working what to do about that but for now it seems to be doing alright most of the time.

Anyway, have a great day and thanks for continuing to come along in our journey.
Posted by Mark Schreiber at 8:24 AM No comments: