Necessary Risk: A car crash, a rocket launch or a cannonball 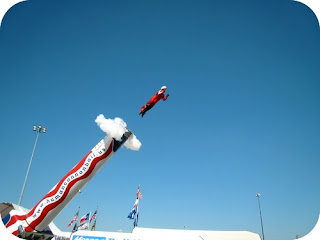 I love analogies and visual examples. I’ve been trying to find a good one for this phase of Abby’s journey but the perfect one has been eluding me. At first I likened it to putting your kid in a car, checking all of the safety devices, closing the door and hurling her toward a wall -in order to smash out all the cancer cells.  But that just felt mean -why would a dad do that to his kid? But if feels like that, there sure is a lot of prep, safety checks, infection checks, and scans -so what else is it like?


A Launch. Yep, I think the better analogy is that of a rocket launch… or maybe a human cannonball.


You see, we’re in countdown mode here in Schreiber World (yes, that’s a real place).  T-Minus 13 days to be exact.  Yet, that too is a bit of a misnomer, Abby actually only has 1 more appointment on Monday, then starts 3 days of Total Body Irradiation (TBI) on Tuesday.  After that starts, there’s no abort button to press, we’ll just be holding on and praying, “God speed”.


In the last 2 weeks we’ve ran Abby through the gauntlet of appointments.  Eye exams, CAT scans, organ function, radiation simulations, final marrow test, meetings, consents, consents, and more consents. She took learning tests, talked to the Phyciatrist, drank some tracer liquid and went to the 'hot lab'. Yesterday she had another surgery, they put a new central line in called a Double Lumen Broviac that will be used during the bone marrow transplant. The preflight workup is almost complete.


Anna also got some hospital time. Had a finger prick, donated a unit of blood, (to give back to herself later) and we signed forms, forms, and more forms. She also had an exam and got to talk to some of those “childlife” folks who all wanted to make sure that she knew that she wasn’t being forced to do this, it’s her choice. She cried a bit from the blood draw, but got to order off the hospital menu! I think the French Toast made it at least 25 percent better, maybe.


The TBI appointment was the most disconcerting to me.  We got to visit the big lead-shielded room and see the machine that will shoot X-Rays at every inch of my daughter, in 6 sessions, over 3 days. We got to hear about all of the other potential side-effects that this therapy can cause. Short term like nausea, to longterm, like other cancers, infertility, brain/memory issues and cataract -to name a few. Out of all of the appointment though, I really appreciated the frankness of this radiation doctor.  I asked her to help me be more at ease about this procedure (after that list of side effects who wouldn't be agitated). I said, “For some reason I’m ok with chemo, but radiation makes me uneasy.”  After lots of questions, and even more answers, she responded, “Yes, we all should limit our exposure to radiation.  But, this is the best chance for Abby.”  And then she said a phrase that I’ve been mulling over ever since.  She said, “We wouldn’t do this unless it was her last option. Yes, there are risks and we should limit them for everyone else, but it’s a necessary risk for her.”


There is a scene in the movie “The Martian” that this makes me think of.  If you haven’t seen it, Matt Damon plays Astronaut Mark Watney who gets stranded on Mars and has to survive until the people back on Earth can figure out a rescue mission. He sciences his way out of a lot of problems and finally has a chance to get off Mars… but in order to do so, he has to take a ride on a stripped down rocket -with a tarp as a nose cone.  He follows the rescue plan, strips all of the heavy parts off the rocket. He gets in his space suit, straps into the rocket and is ready for launch. He has no controls, they were removed to lighten the load, so the rescuing astronauts in orbit remotely fire the rocket propelling through the thin Martian atmosphere and hurtling him at extreme velocity into space.  On the ride up, he blacks out. The ship shutters violently. Pieces fall off the rocket. He's going so fast. At last he regains consciousness and finds himself in space.


If that’s not a good enough analogy then I give up.


For 2 weeks we’ve prepped.  We done all of the safety checks that we can.  But this isn’t a safe thing that we are doing.  It’s a bone marrow transplant.  It’s a necessary risk. We wouldn't do this if there were other good options. At this point we’re just trying to get Abby off of Mars. If that takes some risk, then that’s what you do. If that means getting rid of the windows, the controls, and even the nose cone, that's what you do. If it takes strapping your daughter to this rocket and trusting a bunch of amazing doctors and some risky technology to save her, then yes, that's what we'll do.


“Spoiler Alert”  -In the end, Matt Damon’s character gets home safe and sound. Back on Earth we see him teaching new astronaut trainees lesson from his time on Mars.  He says, “...you just begin.  You do the math.  You solve one problem, then you solve the next one, and the next.  And if you solve enough problems, you get to come home.”


We are all praying, I know you all are too, that Abby’s journey will bring her safely back to our house as soon as possible.  I’m sure there will be problems, but we are praying that each will get solved, one at a time, and when they solve them all, she too will come back to this little pocket of Schreiber World that we call home.


Stay tuned in the coming weeks.
-I’m sure lots of launch updates will be hitting this page soon.

Thank you all for all of your prayers and encouragement.
Posted by Mark Schreiber at 4:47 PM