The Good, the Bad, and the Ug-xhausted 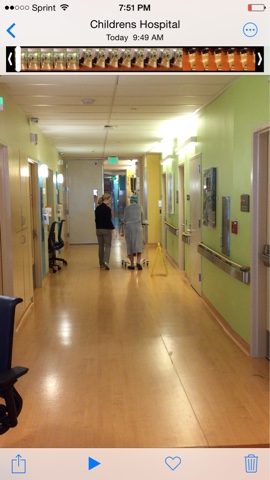 I think the hospital is starting to catch up with us. We're all pretty exhausted right now. Life still goes on even when you don't sleep well every third night. Yet, there has been a lot of good lately to report, and, at the same time, a lot hard.  But, as you all know it just keeps going. So, we keep on going.

I know that people are wondering how Abby and the family is doing so let me give you the quick update.  The Good, The Bad, and The Ugly or in our case, The Exhausted.

The Good-
Well, let's start by saying that those baby monocytes keep marching along and are continuing to turn into lymphocytes. Abby was at 20 ANC for 2 days, then her ANC was 40, 50, then 90 and today she's at 130! As Tiffany said, Abby is also now off of the pain pump and is moving over to mostly oral medication.  Her mouth sores are almost gone and probably her throat/stomach/gut is the same since the pain has subsided. The eating is going ok. Still have to offer her food over and over again to and remind her to try some food. If she doesn't eat enough then they'll move her over to an NG tube (basically a feeding tube through her nose) to feed her. I'm hopeful that she will eat enough to fully sustain her soon, get off the IV, and be ready to leave this place once her ANC is at 500 for three days. We had the discharge meeting yesterday and they are hopeful that she'll hit those numbers next week. So, I guess it really could be out of the hospital soon! Wow.

The Bad- (or mixed emotions really)
Even when Abby is released we still have to stay close to the hospital until Day +100 to +120... That means she can't leave Denver/can't come home until late July/early August. So, we will be moving again... kinda. We now have a 2-bedroom apartment near the hospital in Denver.  It's almost as fast to walk to the hospital as it will be to drive. I wish our house was just a bit closer to Childrens Hospital so we could all be a family together again. But the reality is that we won't all fit very well in 600 sq/ft and to keep Anna and Lily in Denver all summer would be tough for them. They'd basically miss their whole summer playing in the yard and seeing their friends. So, we'll have to figure out some rotation of time together and time apart.

In the midst of all of this, our stuff came on back to our Fort Collins house on Saturday. We haven't opened up all of the boxes yet. As you can imagine, it's kinda like opening up a box of memories. It's nice to have more choices of clothes to wear and the girls were excited to get their bikes back. Understandably thought, they were also a bit sad. Lily said she missed biking as a family in Japan. Anna had a few hard days too and I think some of it can be attributed to the arrival of this stuff. They've had a lot of change.

The Exhausting
With all of that said, I think that not being a family unit continues to be the most exhausting part of this journey. We have always found strength together as a family.  In Japan we biked to school together, played games together, had family nights, talked over spiritual and emotional needs, walked, shopped and sometimes cried together. But now, we are apart. Anna and Lily can't visit Abby in the hospital because it is still "respiratory season" and they are under 13. I think we all are starting to feel the effects of not being that tight family that we were. I had a little Daddy Daughter Movie Night on Monday night since I was home by myself with Anna and Lily. At the same time, Tiffany and Abby had a little movie night of their own in the hospital. And though we may be doing the same things, with 75 miles between us it just doesn't feel the same.

Last night after our movie I crawled into bed with Lily to tuck her in and pray with her and she asked, "Do you think we'll ever be able to go back to Japan?" I told her that she is still young and has lots of opportunities to go back to Japan. But then she said, "But will we ever all go back to live there as a family?". I had to pause. Finally with tears my eyes, I said, "I don't think so honey, I don't think so." And her final question, as if she was just trying to fully wrap her head around this all... Daddy, did they give our house away?" ....."Yes, sweetie. It's not our house anymore."

We all have had, or will have moments like these in our lives. Times like Lily expressed when you just want life to go back to the way it was. Hard times, sad times that you'd rather avoid. Ours just happen to be packed into this year. Yet, we will be a family together again soon, at least part-time, and then full-time. And we will be tighter as a family because of our times together, and because of this time a part. You only know what you miss when it's gone.

Let me leave you with this song from Passenger.  I know he's singing these words from a different heart, but to me, they still ring true to where we are as a family. The truth is that you only see rainbows when it rains.

Here's a cover of the song by Jasmine Thompson that I like. I think she did this when she was 12 or 13 year old. Props to her and all Middle School kids that have dreams of they can do in this world.

Posted by Mark Schreiber at 4:00 PM

<3
So much love for each of you. My heart is right on that emotion of yours; missing what was, not liking what is. It's a time of change, transition, and yet so many things are not changing & exactly where we don't want them to be.

Your memories of time in Japan and the people you made friends with are still here and very real; we are holding you in our thoughts. Remember that day you helped celebrate Aya's birthday by going to the big park near Yokohama called Kodomonokuni? There was a raft, and a long roller slide. We fed squirrels in the "squirrel park" too. Great memories you will have for the rest of your life.